I have mentioned in the past that Mohegan Sun is a veritable dining wasteland in comparison to it's primary competitor, Ledyard's Foxwoods Resort Casino, a building that houses numerous fine places to grab a delicious bite to eat; Jasper White's Summer Shack's Mohegan location is one of the few exceptions to that.  Offering fresh seafood and a few other, primarily southern inspired, entrees to their customers, the Summer Shack is not up to the level of a David Burke Prime Steakhouse or Craftsteak, but it is a good place to grab a beer and something to eat during a night at the casino.

I have had some truly fantastic meals at the Summer Shack, including their fried chicken, which took forever to make but was, as the waitress assured me when she overheard me gripe about the wait, absolutely worth the time, and the gumbo was superb, especially the time I didn't make the mistake of ordering it with the jerk sauce mixed in...oh, my, god.  Tears of pain just remembering that.  Delicious though.  Just ask my buddy Joe. 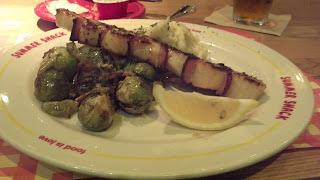 On my most recent trip, I tried a special, seared sea scallops with mashed potatoes and roasted brussel's sprouts.  Each meal begins with a soft roll and a piece of corn bread served with some soft whipped butter; both are fine, nothing special, but a good way to start dinner.  The scallops, though perfectly cooked, with a nice sear on one side, were essentially flavorless; only the pieces of fatty bacon added some real flavor to the primary part of the dish.  The potatoes were fantastic, but it's not a really good thing when the side is better than the main part of the meal.  Sadly, the brussel's sprouts did not match up well with the potatoes, as they were boring, not that well cooked, and lacking seasoning.  They were, in fact, reminiscent of the brussel's sprouts I remember having eaten as a kid; aka, the reason I didn't actually like them until a couple years ago.  The best thing I can say about this entree was that it was all very fresh tasting, but that's just not enough to make me happy.  It was definitely not worth the nearly $30 the dinner cost (including beer, of course), and I was thankful that I had some bonus points from the casino to pay for most of it.

Overall, I actually do recommend this restaurant, I simply had a poor meal there; this was a first, and I suspect it will not happen again.  Order the right things, and you'll be fine.  The beer list is a disappointment most of the time, offering primarily crap (you know, Bud Light and such) on tap, but there's also usually a Harpoon IPA or similar in there, so you'll be fine in the end.  Vegetarians...uh...good luck.

Check us out on Facebook!
Posted by jkommelb at 1:16 AM