It is rare that in a business as competitive as craft brewing that two companies would come together to create a product, but in this case, Sierra Nevada Brewing Company and Dogfish Head Brewery put that aside to brew a really fantastic IPA.  Though they do not really compete for the same market--Sierra Nevada is a west coast brewery that typically does not factor in when discussions of the best breweries come about, while the east coast Dogfish is a frequent visitor to the top of those types of lists and tends to be a craft beer drinker's company--it is still a remarkable testimony to the camaraderie and sense of family that exists within this industry, where a man like Sam Calagione, who as the founder of Dogfish Head is at the forefront of his industry, is thrilled to come together with another pioneering company in this way.  Having collaborated once before, on 2009's Life & Limb, the two joined each other once again to make Rhizing Bines, released in February 2013. 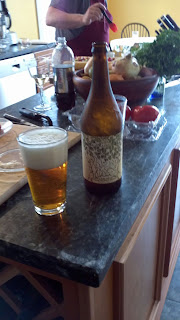 Served in a 22oz bottle with a very cool looking label designed with vines curling down from the top, and the words "Rhizing Bines" twisting together underneath and the logos of the two companies on either side.  It pours a light, crisp amber color, with a massive frothy head that never seems to dissipate.  Tasting it, you get an instant hit of hops, bitter yet smooth, with a slight fruitiness and very slight citrus notes.  It drinks much easier than its 8% ABV would suggest, and until looking it up I did not realize it was such a high alcohol beer. I drank it while eating some smoked port loin, and it really worked well, which jives with Dogfish Head's recommendations for barbecued meats.  It was light enough that it did not overwhelm the light and subtle smokiness of the pork, but it also held up well to the stronger tastes of the mustard and Roquefort that the pork was served with.  I can see this as being similar to the Chimay Blue Cap Grande Reserve for me, in that it is a versatile option with food.

At $12 a bottle, this is not a cheap beer, and while I didn't buy it this time, I absolutely would in the future; it is among the better options that Dogfish Head has put out, and is definitely among my favorite IPAs, holding up well to even the iconic 90 Minute IPA.  I highly recommend it if you can find it, and if you want some, you should start looking now, because I suspect that like most collaborations, this will be a limited release.

Check us out on Facebook!
Posted by jkommelb at 1:45 PM