That was the first thing that went through my head, and came out of my mouth, after my first taste of Ballast Point's Tongue Buckler Imperial Red Ale.  It is not so much that Tongue Buckler is a great beer--it isn't--or that it is bad--it definitely isn't--it is just that it is the kind of drink that makes you think "wow."  I do not really know how to explain it, because I do not love this beer, though I do like it, but it is incredible nonetheless.  The amount of flavor packed into it is kind of bizarre, and I think it is the wide range of tastes that threw me off and also keep me from putting it into the pantheon of beers that I crave.

The first thing that hits you is malt, which you smell as the glass approaches your face, and the fact that it is a 10% ABV beer never comes into the equation, from either sense.  After the malt comes the wheat, then a burst of hops, powerful and a little citric, which takes over from everything else.  Finally, the sweetness of the malt comes back in the aftertaste, while the hops do not really linger.  There is a spicy (not hot spicy, but spices kind of spicy) note as well, though I would be hard pressed to tell you exactly from what.  It is an easy drinking beer, which is good because it is not cheap, but bad because, again, it is 10% ABV, which means that if you drink a 22oz bottle on your you may need to wait a few before driving anywhere. 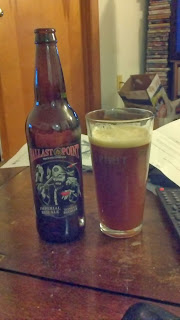 It is a kind of strange looking beer; a few people on BeerAdvocate have remarked that it is not a "red ale" in the traditional visual sense, a dark, cloudy, only slightly reddish pour that has a solid head of deep tan.  I think it looks good, or at least kind of cool, but it is not quite as "pretty" as some other red ales, like the Founders Red Rye PA.  When all put together, it is definitely a beer I will buy again, but I will not crave it the way I do some others.

On a related note, Ballast Point is rapidly approaching "favorite" status, potentially overtaking Maine Beer Company.  The highs (Sculpin, a top three IPA; Fathom, a truly special pale ale; Sea Monster, a beautiful and inspired imperial stout that I did not know was 10% ABV until I just looked it up; and Victory at Sea, one of the most interesting beers I have ever had) are barely behind MBC's Lunch, and tied with or ahead of the rest of the offerings.  Neither company offers a bad beer, though the Serrano Pale Ale from Ballast Point was just plain weird, albeit in a way I can appreciate.  I see Ballast Point becoming what Dogfish Head has been for so many years; a company with a few tremendous year round offerings, some limited/seasonal beers that people seek out whenever they are released, and a revolving stable of "experimental" brews.  Hopefully, those experimental types are a little more successful than Dogfish Head's, but I see a similar level of creativity out of Ballast Point.  I really love this brewery, though, and classy San Diego should be proud of them.  Thank you to my friend Sean for introducing me to them.

Check us out on Facebook!
Posted by jkommelb at 8:37 PM