As I previously said, Korean cuisine is among my few favorites, and Manna House, a tiny little hole in the wall (literally), serves some of the finest food I've ever eaten.  The owner, Mrs. Lee, cooks up fresh, traditional, and filling meals at a pretty reasonable price, all by herself while also serving and taking orders.  This is one of my favorite lunch joints, and is well worth the fifteen minute drive to meet my step-dad or friend who works in town.  The food is good enough that my mom's friends, who live in New York City and are extremely well traveled, consider this to be fantastic.

My favorite options are the Ramen soup, which comes both in both "spicy" or "not spicy" versions (be aware, the "not spicy" still has some spice), the combination platter, which has crispy pan fried dumplings (which are to die for), jap chae, rice, and "sushi", and last but not least, the spicy squid with rice.

If you've never had it in a Korean restaurant, then the Ramen will be like nothing you've ever had before.  Banish thoughts of "Top Ramen" and "Cup O' Noodles."  This is not that.  Spicy and savory, with flavorful noodles, green onions, and a fried egg, this is the single best remedy for a cold I have ever found; seriously, keep your Nyquil and Sudafed, I'll take a spicy bowl of Ramen.  It's a lot of food, but I've never even considered not finishing it, even when I was full; it's too damn good to waste.

The combo platter is a great option for people who don't like spicy foods, which most of my preferences on the menu are.  The japchae, sweet potato noodles with vegetables, is an oddly refreshing dish for a hot noodle dish.  The rice, as with all the rice served at Manna House, is properly cooked (something that should not be underestimated; seriously, how often do you get truly well cooked rice?), but lacks flavor, so I tend to use some soy sauce.  The "sushi," which is similar to the traditional Japanese variety but using either ham or kept vegetarian, is tasty but nothing to go out of your way for in my opinion, though my mother loves it.  Lastly, the real star of the show, the yakimandu, or dumplings, are also available either in pork or vegetarian versions.  Crispy pan fried, with a ridiculous amount of flavor, texture and scent, these dumplings are amazing; pretty much everyone who I've gone with thinks they're the best thing offered, and it'd be difficult to argue that point.  These aren't your standard potstickers found in Chinese restaurants; the dough is thicker, and actually is flavorful on its own, and the filling is strongly flavored but without overwhelming any of the other ingredients.

If I'm not in the mood for soup but still want something spicy, the squid and rice is great.  The sauce that comes on the squid (separated from the rice, which will become important as you get towards the end of the meal and need that plain starch to soak up some of the heat that's already hit your palate) just looks spicy, a bright red with obvious flecks of chiles.  The squid is cooked properly, something that you will almost never see, sadly; squid is always overcooked, making it tough and, well, gross.  The rice, squid and sauce together is a truly ingenious combination that makes me want to travel back in time, find the Korean chef who came up with it, and give them a big hug.  The only complaint I can find with this dish is that squid is a delicate flavor, and it does get a little overwhelmed by the sauce; however, it is not by the spice in the sauce, but by the flavor, so this is a nitpicky kind of gripe.

Overall, this is the best truly Korean restaurant I've been to (Danji, mentioned in an earlier post, does not count, as they are a "fusion" restaurant), and I highly recommend it to anyone in the area, or traveling through.  For under $10, you can get a lot of great food and be exposed to a cuisine that many people have never experienced.  The owner is extremely friendly, and after having gone to Manna House only about four times has recognized me ever since, and even knows what my favorites are.  The meals are all served with banchan, small plates of sides such as kimchi, beat sprouts, or potatoes in a slightly sweet brown sauce that I can't identify but that is really delicious.  There is also a tea that I'm pretty sure is buckwheat, but don't take my word on that; it's good, but it took me a couple tries to really like it, so if you don't enjoy it immediately give it another shot.

One last note; unlike most of the restaurants I go to and enjoy, this is actually very vegetarian friendly.  The options if you don't eat meat aren't wide, but what's available is delicious and both vegetarians I've taken enjoyed it.

**Update**
05/17/12:  It appears that Manna House has moved to a larger location on Bank Row in Greenfield, so it will be interesting to see if the menu changes/expands, and whether they're able to sustain growth.  I'll be checking it out soon I'm sure.

06/13/12:  I finally made it to the new Manna House location, and while the food hasn't changed (a good thing), this location is far, far better.  It is still not large, but now it can seat probably 30, rather than 9, and the room is beautifully decorated, clean, and welcoming.  As soon as I walked in the owner recognized me, and knew that I had not been in since she moved; while this is a small thing, it really makes a person feel welcome and comforted, and is among the many reasons that I will continue to patronize this establishment.

09/25/12:  I spoke with the owner, and she is planning on getting a liquor license, but it's a tough sell in Greenfield, a town that is already saturated with liquor serving establishments. 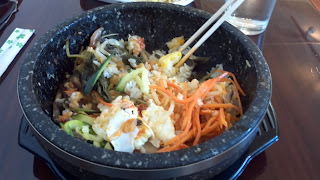 Also, I got the dol bi bim bab, and it was fantastic.  Served in a sizzling stone hot pot, this rice topped with vegetables and spicy chili sauce was so damn good I didn't even mind that it was vegetarian.  The mushrooms add some meaty flavor anyways, and the egg perfectly cooked as it sat on the top.  All mixed together, it creates a delicious amalgam of flavors and textures.  The rice along the bottom of the bowl crisps up a little, reminding me of the way a proper paella does as well.