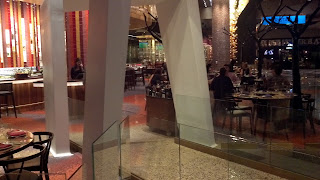 ﻿Julian Serrano, the eponymous tapas restaurant residing in the Aria Resort & Casino, provided the best of the meals I had in my brief four day stint in Las Vegas, NV, arriving on Friday evening and leaving on Monday evening.  This was where my friend Joe, his classmate Renee, and I went on Sunday evening.  They had just run a Tough Mudder race that day, and were in the mood for a good meal to celebrate.  After a little discussion over where to go, Renee suggested this, and I am extremely thankful she did.

Our waiter recommended that we get two or three tapas each, but since we decided we wanted paella, we ended up ordering three tapas and a dessert.  The first we received was the Black Pig Pintxo, a traditional Spanish bar snack, consisting of a slice of crispy baguette topped with caramelized onions and cured, seared Iberian pork shoulder.  They offer the pork cooked medium rare to well, and, of course, we ordered medium rare, which was perfect, tender, with a perfect Maillard reaction from the searing, and a huge pork and pepper flavor.  We all loved it, and since it only came with two pieces, we were all left wanting more.

Second to arrive was the cheese plate, consisting of four slices of toasted baguette, four cheeses, and a truly delectable fig spread.  The cheeses were: a caña de cabra, which is a very soft, easily spreadable goat's milk cheese; a year old sheep's milk Manchego; a cow's milk Cabrales bleu; and a soft sheep's milk La Serena.  All were fantastic, with Renee preferring the Manchego, Joe loving them all, and my favorites being the Manchego when combined with the fig spread, or the caña de cabra, which was a little too delicate to combine with the spread.  The bleu was remarkable, and La Serena was perfectly mild.

Third to come were the Tuna Cones, consisting of a crispy wonton wrapper cone, with avocado in the bottom, topped by cucumber, and ahi tuna tartare, lightly dressed with ponzu.  The tuna flavor was strong, extremely fresh and high quality fish, and the avocado, which was extremely soft and smooth, added a nice flavor and texture contrast.  The cones were presented in a nice, very likely custom, holder with three slots for the cones.  This was my favorite tapa of the night, for its simplicity and classic flavors, presented in a clever, new manner.

Following the tapas came the mixed paella, a signature dish of Julian Seranno's, consisting of half a lobster tail, mussels, chicken, Spanish style chorizo, vegetables and of course the classic saffron rice.  Served in a paellera, this was the highlight of the night for all of us, with perfectly cooked lobster, and mussels that were cooked well, but a little dry.  The chorizo was great, a classic flavor that anyone who has had chorizo before would recognize instantly, but with a bit more depth of flavor than normal.  The rice was incredible, so smooth and creamy, with crispy bits around the edges that are the trademark of a proper paella.

Last to eat were churros, served with Mexican chocolate.  Thin, crisp, and just slightly sweet, while the chocolate was creamy and strong, though lacking the spice that I was expecting both from the description and from the chile de árbol that was in it.  The combination worked well, but I think it would have been better with that added hint of spice.

Along with our meal we had a bottle of Martin Códax Albariňo Rias Baixas 2010, a crisp, dry white wine that went perfectly with the tuna, cheese and paella, though it was not the perfect combination with the pork.  The wine had some nice floral notes, and was among the best white wines I have ever had.  I will be looking at my local wine shop for this, I can assure you of that.
Overall, this was a fantastic experience.  The waiter was great, attentive, knowledgeable, and unlike many waiters at finer restaurants, did not appear to be displeased be be dealing with a group of younger people who would not be spending several hundred dollars.  Speaking of cost, with a 25% tip, the meal cost us just under $200, exceptionally reasonable when you consider that over $100 of that was from the wine and paella.  While I can't guarantee that I would return during any future trips to Las Vegas, that is simply because there are just so many places that I want to try in the city.

**As a side note, the restaurant does appear to be very vegetarian friendly, if that's your thing