I'll admit, I'm not a huge fan of Las Vegas.  That said, I enjoy many of the things that come with the city, including gambling, good nightlife including great bars and occasionally clubs, and incredible food.  I've already detailed my trips to Julian Serrano at Aria and Burger Bar in Mandalay Bay, but my trip included several other good experiences, both for food and entertainment.

My trip was with my best friend from college, Joe, and one of his classmates at the Harvard Kennedy School, Renee.  On Friday Oct. 5th, my first night, upon arriving at the Palazzo Joe, Renee and I went to grab some food at I ❤ Burgers, which is conveniently located on the second floor of the hotel, tucked in among The Shoppes at the Palazzo.  Like Burger Bar, I ❤ Burgers offers both the option of building your own burger or selecting one off the menu.  I chose the "Inferno" burger, made with ground Angus beef, pepper jack cheese, lettuce, tomato, roasted jalapeños, and habanero-jalapeño mayo.  The waitress recommended having the mayo on the side, and she was 100% right; that was hot.  Unlike the chipotle aioli at Burger Bar, which was not spicy enough and got lost in the rest of the flavors, this mayo was exceptionally hot, and risked overwhelming the burger, though I didn't use much after tasting it before putting it on the bun.  The burger itself was great, made perfectly rare (slightly less so than at Burger Bar, but still within that perfect range), on a nice brioche bun that complimented it very nicely.  Joe had a "Plymouth's Pride" turkey burger (I know, I know...it's not really a burger) because he was running a Tough Mudder in a couple days, and figured it would be a good idea to eat light.  He seemed to enjoy it.  Renee had already eaten dinner, so she stuck with a shake, which Joe shared, and both liked, though I don't know what kind it was.  We also got some onion rings, which were exceptional; hot, crispy, with the batter clinging perfectly to the onion so that when you took a bite it doesn't fall apart.  It was served with a dipping sauce that was pretty good, though I can't for the life of me remember what it was.  For a drink I went with a Kona Brewing Company Big Wave Golden Ale draught.  Very smooth, very tasty, and a nice, subtle compliment to the burger.

After dinner, we dressed up and hit TAO, a nightclub at the Venetian, which is the sister/adjoining hotel to Palazzo.  Because we were staying at the Palazzo, we were able to get right into the club, which saved us a lot of time waiting in a line and also meant we didn't pay a cover.  When we got in, it was just Renee and I at first, as Joe went to get drinks before we figured out we could be in a much, much shorter line, and it took him a while to find us once we got in.  At first it was a lot of fun, as there weren't too too many people there, and we had a little space to move and breathe, but it quickly got extremely crowded.  One couple next to us were literally humping each other, and the guy ended up knocking my beer out of my hand without even so much as an apology; this is a significant part of why I don't frequent clubs, along with the fact that I'm hilariously bad at dancing.  After a while, Chris Paul, Blake Griffin, and a couple other members of the LA Clippers showed up, and at that point, it went from being fun to being a little over the top.  We had accidentally ended up in a spot only about 10 feet from where the "celebrities" were hanging out, so we ended up getting crushed by the crowd.  We spent about another hour there before we got sick of getting squeezed by people and made our way out with some difficulty.

Saturday we grabbed breakfast at Wolfgang Puck's Solaro Poolside, which had a limited menu, and quite honestly awful service.  The food received mixed reviews, as Joe did not even remotely enjoy his buttermilk pancakes (made with fresh blueberries and blueberry compote), but Renee and I, who wanted both the breakfast burrito (with scrambled eggs, mozzarella cheese, chorizo, potatoes, and two salsas, one a fresh salsa and the other a spicy tomatillo, which I preferred) and the granola parfait (house made granola, vanilla yogurt and fresh berries) just ended up each getting one and splitting them and loving them.  The parfait was really good, not too sweet, and the granola was really nice, but it did not come close to the breakfast burrito, which was exceptional, and I sort of regretted agreeing to share it, as I wanted the second half after finishing my part.  Everything in it was perfectly cooked, and the chorizo and tomatillo salsa added a really great kick that assisted with getting rid of the little hangover I had from the previous night.  The coffee was merely acceptable, though Joe liked it, and he's a coffee addict.  As I previously said, the service was terrible, as we waited at least 10 minutes from when we sat down before the waitress came over to take our order, and when she did she neither said hello nor offered any sort of pleasantries, simply stating "Go ahead."  The service did not particularly improve over the course of the meal, either, and was not worthy either of the hotel or a chef like Wolfgang Puck.

After breakfast we lounged by the pool for a couple hours, reading, chatting and attempting to get some sun, which I badly needed.  It was quite pleasant until the sun came down in full force, at which point it got extremely hot, jumping in temperature a solid 15 degrees the second the sun hit us.  I ordered a piña colada, which was great, but cost me a whopping (and surprising) $17 dollars, which the waitress (or Joe, who had previously gotten one) didn't feel the need to tell me ahead of time.  We then went inside and got to gambling, which was entertaining but doesn't make for much of a story.

Later on we grabbed some food at Ra Sushi, which serves non-traditional sushi and Japanese influenced dishes.  We were there right at 3:00pm, when happy hour starts, so certain drinks and food were significantly marked down.  A bowl of edamame, some shrimp tempura, a spicy shrimp roll, spicy yellowtail roll, and two straight fish preparations later, we were pretty happy, and got out of there for a very reasonable amount of money.  The sushi was, as I said, non-traditional, so if you only like pure, unadulterated sushi this is not the place for you, but the fish was very fresh and flavorful, and presented in a pleasant way that made it well worth it to go, at least during the happy hour period from 3pm-7pm Monday to Saturday.  The Seared Tuna (perfectly done) and Garlic Citrus Yellowtail were ridiculously good, especially the yellowtail, which is my favorite fish.  Sadly it's also supremely overfished, so hopefully farming gets better (aka, more ecologically friendly), ensuring a continuing supply of this delightful fish.  There are, of course, many better options for real sushi, but this was a fun, nice little place to go have a snack.

On Sunday I went to lunch with my brother while Joe and Renee were at the Tough Mudder, and we went to a Greek restaurant that I do not recall the name of, though I will try to remember to ask him since it was really fantastic.  I had stuffed peppers, which were great, with lamb and olives being the dominant flavors, served with a huge amount of rice and a salad.  We also got hummus to share, served with pita bread; now, hummus being both delicious and quite ordinary most of the time, I wasn't expecting anything different from what I've had elsewhere, but this was really great.  I have no idea what the difference was between what I'm used to and what they do, but it was really great. 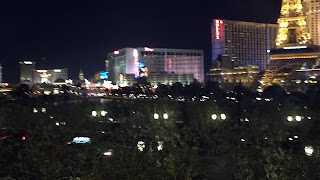 Among the things I really do enjoy about Las Vegas is simply walking up and down the Strip, seeing the sights, and it's best at night, where amidst the dozens of Central American immigrants attempting to hand you fliers for "escorts," you can see some pretty cool stuff, such as the Bellagio's Fountain Show, or cool street performers.  So, while there are plenty of places I'd rather go, when I do end up in Las Vegas there are also many, many things I can find to do (or eat) that lead to a fun trip.  Coming up in about a month, I'll be headed back so the family can all celebate my mom's 60th birthday together, and I'll be reviewing Bouchon Bistro, a Thomas Keller restaurant.

Check us out on Facebook!
Posted by jkommelb at 9:56 AM