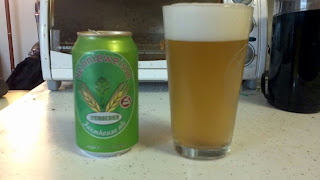 I'll admit, I purchased the Heinnieweisse, a weissbier (spelled weissebier on the can) by Butternuts Beer and Ale (check out the website, it's probably the best I've ever seen from a brewery) of Garrattsville, NY, accidentally.  Cans still being a bit of a rarity in the craft beer section, these were situated next to a variety of Oskar Blues beers, so I, not paying much attention, assumed these were as well.  It turned out not to be so bad, as the beer is enjoyable and refreshing, and based on the description of weissbier on BeerAdvocate it is a fine example of the variety.

Similar in taste and feel to a classic saison, the entertainingly named Heinnieweisse is a light ale, lacking hops, but with a pleasantly sweet malt flavor to it.  The head, which looks impressive enough when poured from the bright green can, dissipates quickly, which is a classic trait of the weissbier, though it is delightfully foamy while it remains.  Once it disappears, it does so almost entirely, leaving simply a ring around the edge of the glass of lacy white bubbles.  It is a cloudy looking brew, rendering it nearly opaque, though the light golden color would lead you to think it should be nearly clear.  The taste of the beer, besides the malt, is rather simple, just a wheaty flavor that the two sprigs of it on the can promise; I did not really notice the clove taste that some of the reviewers on BeerAdvocate mentioned, though I could agree with a light citrus taste if pressed.

At just 4.9% ABV, this is a fine option for a warm summer's day spent grilling or hanging out with friends, and it goes well with summer food; while writing this review I was drinking one while eating stuffed patty-pan squash, a laughably shaped summer squash grown just a short way up the road from me by Atlas Farms.  While it is not ever going to be a favorite of mine, I would say it's worth a try.

Check us out on Facebook!
Posted by jkommelb at 5:43 PM