Located a short walk from the Casco Bay Lines ferry landing on Peaks Island, the Cockeyed Gull restaurant offers decent to good food, acceptable alcohol, and some truly stunning views from their back deck.  A beautiful place to sit and enjoy a meal, my step-family and I had a very nice Independence Day dinner there, and as long as you order the correct things, it is my best recommendation if you are visiting Portland and make a trip out to the island, or are vacationing there already.
**Full disclosure:  my step-sister worked as a waitress at the Gull for a couple summers, but then, she's worked everywhere else on Peaks Island as well, so I feel like I have a pretty good handle on the restaurants, of which there are only a few, and can offer an unbiased opinion.

We started by sharing a few appetizers amongst the table, including a couple orders of oysters on the half shell, a beet salad, and a scallop special.  The oysters were, I believe, from the Damariscotta River, my personal favorite locale for oysters, where they do not grow to be very big, but are exceptionally flavorful, with a vibrant sweetness and brininess.  They were served with a "deconstructed" mignonette sauce, some traditional cocktail sauce, and my favorite, fiery and pungent horseradish.  The beet salad was delicious as well, but it was the scallops that were truly remarkable.  Perfectly cooked, something that rarely occurs, they were not seared but rather, I presume, poached, and had such a delicate texture that it is difficult to describe it.  It was served with tomatoes and other vegetables that were wonderful as well.

My step-sister encouraged me to stay away from the more Italian inspired dishes on the menu, so I went with the Potato Crusted Haddock.  I love haddock, which along with cod and hake is one of a few thoroughly fantastic, completely under-appreciated fish, and potato crusting is both a neat concept and really tasty.  The Gull did a nice job with this, as the fish was nicely cooked, possibly just a hair over, but barely enough to even notice it; the potato crust was crispy and succulent, and while it pulled a little away from the fish, it was much better than how I have had it in other restaurants, where the crust barely stays attached past the first bite.  Served with roasted acorn squash, which was exactly what it should be, sweet and savory all at once, it was a good side dish.  The dish was huge, with a giant slab of fish and about half of a squash.  My step-sister got the same, and enjoyed hers as well.

The other two entrees at the table were a special scallop dish and a lobster pasta dish, the first of which was successful while the latter was a failure.  The special thinly sliced scallop crudo served with basil and crostini, which was delicious, but the basil overwhelmed everything.  It was a very small amount of food for an entree, but considering how much food we had ordered, that was not a problem.  The lobster pasta dish had far, far too much sauce (a simple red cream sauce) and not nearly enough lobster, so that everything seemed drowned and overshadowed.

For dessert, I went with carrot cake, which I was promised would be the best I had ever had; it was not.  It was, however, quite good, but could not live up to David Burke Prime's version, which had far less sweetness and far more actual carrot to it.  This did not have anything that felt like carrot texturally, and the frosting, of which there was an abundance, was sweeter than I would have preferred.  It was still probably the second best I have ever had, but that is not necessarily saying much.

This was a very nice meal, but for four people, it was not cheap, even with a couple bottles of wine, a beer for me, a couple cocktails and some port to end the night, so I would not recommend this for those who do not have high end prices in mind.  That said, if you order the right thing, and go at the right time, it is well worth it, as you can see from the pictures below.  There was a nice view of the fireworks at the end as well; unfortunately, Portland really dropped the ball on the show this year, but the view was still beautiful. 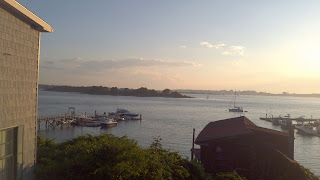 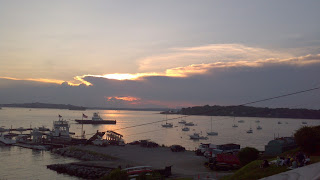 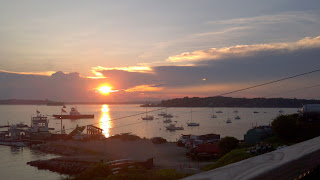 Check us out on Facebook!
Posted by jkommelb at 4:31 PM