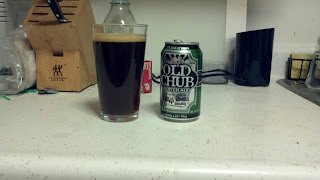 A dark, rich amber beer, this little gem came to me via a friend who stayed with me for a couple nights and left one can upon leaving.  Oskar Blues Brewing Company, a Longmont, Colorado based brewery, is one of the many craft brewers to offer their beers in cans rather than bottles, a vastly more economical method of packaging and shipping for the company.  I'll admit, I had never heard of them, and while my friend went with a six pack of this, I grabbed a four pack of Chimay Blue Cap Grande Reserve, which served me quite well.  The Old Chub, however, is a damn fine beer, and was very nearly the equal of my Chimay.

Scotch Ales are strong, vibrant, and intense beers, the brewed equivalent of their whisky counterpart.  This beer is a good example of the style, with a hefty, and noticeable, alcohol content at 8.0%, some impressive hoppy flavor without being particularly bitter, and almost a sweetness that reminds me of Scotch whisky.  It lacks any real head, with just about a centimeter settling briefly on top before melting away into some lace around the edges of the glass, but otherwise is a nice looking in the glass.  The beer has, as I said, a little something that almost equates to sweetness, though I'd say it's not quite there; it's the sugars from the grain used and the malting process used to make it coming through, for sure, but it's not overwhelming (which to me, means any real sweetness in a beer, something I tolerate in few brews).  The beer is highly rated on BeerAdvocate, usually a pretty good sign, especially since Jason Alström, one of the founders of the site, is a big fan.  I'd highly recommend it, as a reasonably priced, high quality craft beer of a style you don't often find.

Check us out on Facebook!
Posted by jkommelb at 11:52 PM