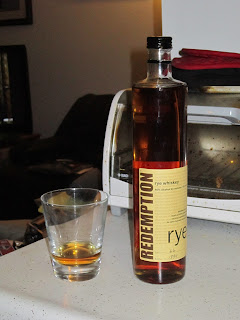 Redemption Rye is a 95% rye, two year aged whiskey made by Lawrenceburg Distillers Indiana, LLC, and the first rye whiskey I have ever purchased.  After thoroughly enjoying a glass of A.H. Hirsch 25 year old rye (an Anchor Distilling Company product) a few months ago, and at the urging of one of my more whiskey enthused coworkers, I picked up a bottle of this at the liquor store across the street from my apartment, and have been enjoying it ever since.  While not nearly as smooth as the A.H. Hirsch (not to be confused with Hirsch, which is a super high end spirit, while the A.H. Hirsch is a step below), it is a very drinkable whiskey, with a really nice oak-y flavor and a sort of spicy note that reminds me of spiced rum...except, ya know, good.  I have been drinking it both straight and as an addition to hot cider, which is my favorite non-caffeinated hot beverage.  I know this is not exactly a traditional pairing, but it actually works really well, and if you like whiskey and cider, it is a tough combination to beat.  Overall, this is a really nice whiskey, and I think I only paid about $30, if not less, for the bottle, so it is not exactly a wallet killer, unlike most of the Bourbons and Scotch whiskies I enjoy.

Check us out on Facebook!
Posted by jkommelb at 2:09 AM