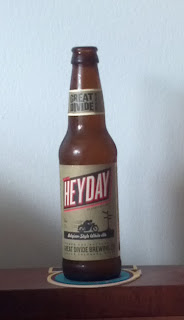 Great Divide Brewing Company is a great brewery, putting out some fantastic beers, including the spectacular Claymore Scotch Ale, the light and refreshing Nomad pilsener, and the second best beer I had at the 2013 American Craft Beer Fest, the Chocolate Oak Aged Yeti, an imperial stout that beats out almost anything else in the category.  Their Heyday Belgian Style White Ale, though, is only okay, an acceptable but not particularly special example of the witbier category.  I personally love witbier, including the always delicious Allagash Brewing Company White, and I think it is among the best options for introducing non-beer people to "real" beer, showing them an alternative to the Budweiser and Coors products that many think represent beer.

The Heyday is just a little bit too sweet, with a bit more fruitiness than I typically expect.  I expect a little bit of citrus flavor in my witbier, but this just goes a bit too far on the fruit scale.  That said, it is pleasantly wheaty, and an easy drinking beer, than went nicely with the Greek pizza (feta, black olives and tomatoes) I drank it with.  I think this would likely appeal to many who are on the fence about beer, and would likely be a good segue into craft beer for the Blue Moon crowd, but it is not going to hold its own against the top tier examples of the style with major beer fans and aficionados.  This is sort of the sweet white wine of the beer world; it won't offend anyone, but it probably won't thrill anyone either.

Check us out on Facebook!
Posted by jkommelb at 7:16 PM