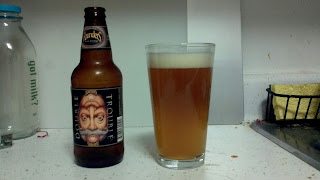 Founders Brewing Company has deservedly been getting some great press in the last few years, making numerous "best of" lists, attracting hugely positive reviews and, it seems, expanding their operations, as I am now seeing their beers at more and more shops these days.  After trying four of their six year round beers, I picked up a four pack of the specialty Double Trouble, an imperial IPA, at the local Whole Foods, of all places.

Double Trouble is not the hard hitting, super powerful double IPA that, say, the Dogfish Head 90 Minute IPA is, or the aggressively bitter variety like Stone's Ruination IPA; instead, it is a subtle, but engaging beer, hoppy without bitterness as you drink it, and a malt undertone that gives just a hint of sweetness.  The Founders website claims that it has a bitter finish, and I can see how this could be argued, but it is more of a bitter aftertaste, in a really pleasant way; it sort of feels like the beer is cleansing your palate after you drink it.

The beer is a beautiful, foggy golden amber, with a weak head that disappeared after just a minute or two.  The flavor, as with most beers like this, becomes more pronounced and vibrant as it warms slightly, so it is worth letting it sit for a couple minutes after pouring it.  I'll admit, I was surprised by both its ABV (9.4%) and IBU score (86), as it drinks like a 5% beer and the bitterness is just not that powerful.  I think this is actually a really fantastic option because of those two things; many beer drinkers, even those who are aficionados (or wanna bes) still don't like the taste you can get with super high alcohol contents or really high IBU values, so they avoid the imperial IPAs; this will allow them to enjoy the other aspects of the genre, without the drawbacks.  Highly recommended, I can see this becoming a much loved beer for me during the summers.  Sadly, it is only produced in May and June, so get it while you can.

You can find my reviews of Founders Red Rye PA here.

Check us out on Facebook!
Posted by jkommelb at 8:54 PM