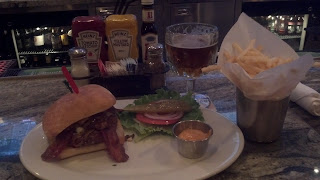 Burger Bar is the creation of the master French chef Hubert Keller, whose Fleur de Lys is considered by many to be among the finest restaurants in the United States.  Burger Bar is the more laid back of Keller's concepts, focusing on the classic American dish with a strong nod towards fresh ingredients.

A small selection of "Chef's Burgers," recipes of Keller's own making, which include an "American Classic," "Vegas Vegan," and "Spicy Lamb Burger," make up the backbone of the menu.  The crown jewel of these offerings is the "Rossini," a "Kobe Style Wagyu Beef" burger, with sauteed foie gras, and shaved truffles on an onion bun.  Getting past my objections to the whole the "Kobe" and "Wagyu" naming issue, this does sound like one hell of a burger, though at $60 a pop, it's tough to justify it if you haven't had a great weekend at the tables.

Along with the "Chef's Burgers," the customer can choose to build their own burger, using one of five base burgers:  Black angus beef ($9.75); Naturesource ($10.50); Lamb "Merguez Style" ($15.00); Buffalo ($17.75); Kobe Style Wagyu beef ($17.25).  You can also pick from "non beef" options, including the vegetarian burger, chicken breast, salmon steak, and turkey burger.  Upon choosing your burger, you then choose among a few bun options, including a classic plain bun, onion, or ciabatta.  There are 46 topping options, split into categories:  The Garden, including such things as baby spinach, avocado, and chopped jalapeño; The Dairy, with a number of cheese offerings; The Grill, with peppers, zucchini, and carmelized onions; The Farm, with various bacons, egg, and foie gras; The Ocean, which has lobster and shrimp; The Pantry, with such offerings as guacamole, homemade beetroot pickle, and truffle mayo; The Earth, containing the $30 black truffle shavings, and other less expensive mushrooms; and lastly sauces from Keller's Fleur de Lys, including an au poivre cream sauce.  Your last choice is accompaniment, including "skinny" and "fat" fries, referring to their cut, not their caloric or fat content, sweet potato or zucchini fries, onion rings, and croquettes.  Each item adds a certain amount to the cost.

I went fairly simple, sticking to things I knew I would like.  For the burger I selected the Naturesource beef, which is USDA prime beef raised without antibiotics or hormones, cooked rare, to which the bartender/waitress said "you know, that's really rare..."  I wanted to settle in and live there from that moment.  I selected a ciabatta roll for a bun, with bleu cheese, bacon, grilled onions, and a chipotle aioli, with tomato, lettuce, sliced onions (which I didn't use) and a dill pickle coming standard on the side.  As an accompaniment I ordered the skinny fries, which quite honestly were disappointing.  The burger was fantastic; perfectly rare, almost cool inside, with a soft, melting texture to the meat; my only complaint was the lack of a good crust on the burger, though that is a risk with a rare burger.  The toppings were great, the bleu cheese nicely melted into the grilled, slightly caramelized onions, while the bacon added a nice, slightly crisp, meaty, piggy taste.  The onions provided a little sweetness that cut the intense meatiness of the beef and bacon, and the roll was a great vehicle for the burger.  The aioli was disappointing, as it was completely lost in the midst of everything else, and lacked the spice that I was expecting from something made with chipotles.  It did serve well as something in which to dunk the fries, which while perfectly cooked lacked flavor of their own and needed something to make them a little more impressive.

Along with the extensive list of available burger options, the drink list is incredibly impressive.  Between the milkshakes, which can be ordered off the menu or customized, both virgin and alcoholic, the beer floats, and the beer list itself (which is pretty impressive) you have a ton to choose from.  I ordered the Dogfish Head 90 Minute IPA, which ended up being the perfect beer to go along with the burger, as it was strong enough not to be overpowered, but also not to overpower the food.

Overall, this was a great experience, and a great burger, easily the best I have ever had.  The ingredients were fresh and delicious, the service was friendly and welcoming, and the setting was nice, a real sports bar feel despite the upscale nature of the food, with televisions lined up behind the bar.  Price-wise, it's not cheap, clearly, and I got out with a $30 tab after leaving an extremely generous tip, but it was well worth it and I'll absolutely go back.

Check us out on Facebook!
Posted by jkommelb at 8:13 PM