David Burke Prime Steakhouse is exactly what its name implies; a top of the line steakhouse utilizing the recipes of America's king of steak.  Along with Tom Colicchio of Top Chef and Craft Restaurants fame, David Burke is at the top of the steak-centric restaurant world, and I have been dying to try Burke Prime for a couple years, ever since I started playing poker at Foxwoods Resort Casino, but hadn't had a chance.  Burke Prime is pretty damn expensive typically, but with Foxwoods rewards points I was able to cut the bill in half before tip.

I arrived fairly early in the evening, around 5:30pm, having busted out of a poker tournament.  Needing something to perk me up, I decided to treat myself to a nice dinner, and I'm quite glad I did, as this was some of the best food I've ever had.  As I didn't feel like spending $150, I went with the three course prix fixe menu, which for $50, allows you to choose from six appetizers (French Onion Soup, Lobster Bisque, Double-cut Maple Pepper Bacon Strips, Clams Casino, Surf and Turf Dumplings, and the Mixed Green Salad), four entrees (Slow Roasted Prime Rib, "Angry" Filet Mignon and Jumbo Shrimp, Braised Short Rib "Stroganoff Steak," and Grilled Salmon), and the various desserts on the menu (I suspect the "Can 'O' Cake," the restaurant's signature dessert, is not available).  I would like to have had the chance to try the Himalayan Salt Dry Aged Steaks, aged using a proprietary process that he has even managed to patent, but I wasn't in the mood to spend $65 for a steak; following a tournament win, I'm sure that will change.

The beer list was at once disappointing (the draughts) and promising (the bottles), and the beer I initially was going to go with, an IPA on draught I had never heard of before, had actually just run out, but I was changing my mind even as the bartender informed me of that.  I instead went with the Widmer Brothers Pitch Black IPA, a 6.5% "black IPA" or "black ale" offered in 12oz and 22oz bottles (I went with the latter, of course, which my waiter/bartender, Timmy, applauded, making a crack at McDonalds and "super-sizing" in the meantime).  I wanted something that I knew would go well with steak, and IPAs, especially these new black IPAs, offer a great compliment, having enough flavor to stand up to even a very heavy, beefy steak.  I absolutely loved this beer, my first foray into Widmer's lineup, as it approaches even the best of this genre that I have had (the Stone Sublimely Self Righteous Ale I had at the ACBF).  Poured into a 12oz flute glass, the color matches the name, as it is a pure, deep black color, reminding me of liquid onyx, and it has a truly beautiful look with the lacy, cappuccino colored foam forming on top.  The taste is heavily of hops, with a great bitterness as it hits your tongue, which subsides quickly, leaving a subtle, but pleasant, aftertaste.  The mouth feel is smooth, almost porter-ish, and I would say overall this beer seems to me to be almost the result of a marriage of a porter and an IPA.  I will be searching for this at my local beer stores.

When it came to the food, I needed a little help, so I relied on Timmy's knowledge of the menu.  I was struggling to decide between the Clams Casino (clams on the half-shell cooked with butter, bacon and breadcrumbs) and Lobster Bisque for the appetizer, and the Slow Roasted Prime Rib versus the "Angry" Filet Mignon and Jumbo Shrimp, all of which sounded fantastic.  Timmy suggested pairing the Clams Casino with the Prime Rib or the Lobster Bisque with the Filet, matching light with heavy in the first case and heavy with light in the second; at his recommendation I went with the former, because, as he put it, "I like fat in my steak," and the Filet lacks that.

The Clams Casino were well cooked, with the breading crisp but not to the point of shattering when you touched it.  The clams themselves were juicy, though a couple had a little grit to them.  With a little Tabasco sauce and lemon juice, they were perfectly tangy.  The clam shells were nestled into small piles of whipped potatoes, which were really good, but could have used more butter (but then, what couldn't use more butter?).  Overall a really good, but small, appetizer, that went nicely with the beer.  (I thought I had a picture of this, but apparently my phone crapped out on that one.) 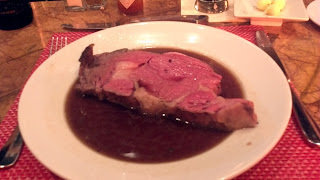 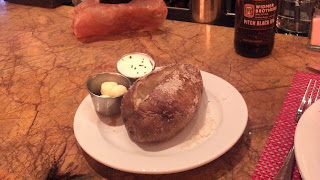 The Slow Roasted Prime Rib was truly incredible, the best I have ever had, beating out even Lawry's The Prime Rib (I went to the Beverly Hills location) and Kimo's in Lahaina, HI.  They won't serve it less than medium rare, because the method they use to cook it, a very long, slow roast, actually makes it extremely difficult to get a true rare, but this was closer to rare than medium rare anyways (Timmy put in the ticket a request for "As rare as possible"), and it came floating in a lake of au jus so strong it tasted like beef stock.  So tender that it essentially melted in my mouth, the prime rib tasted of just three things:  beef; salt; and pepper.  This is exactly as it should be.  Nothing else is necessary to make a quality hunk of beef perfect, and Burke Prime embraces that.  Along with the prime rib itself came a large baked potato crusted with kosher salt, served with butter and what I believe was homemade sour cream.  The sour cream was the best part of that, as the potato just tasted like...well...a potato.  Nothing special there.  I didn't finish it, but that was less because of how it tasted than the fact that the portion was huge, and I was attempting to save a little room for dessert. 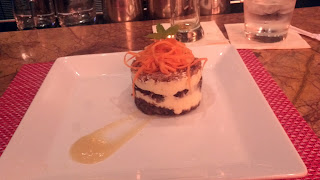 I don't particularly love super sweet dessert, and I was already so full that I didn't want someone too rich, so Timmy suggested that I go with the Carrot Cake, which I agreed to.  Carrot cake as a general rule isn't my favorite, but it sounded perfect in this case, since it's typically very light and airy, and since this doesn't come with a super heavy cream cheese frosting, sweetness wasn't as big an issue.  This was probably the best carrot cake I've ever had, but it was a little sweeter than I was hoping for.  It was served with shredded carrot on top, which was the saving grace in this case, as it cut the sweetness to a manageable level.  That little smear in the bottom left corner of the plate was pineapple sauce (there were also little chunks of it in the cake itself) that was absolutely freaking divine.  Seriously, if they could bottle that I'd pay exorbitant amounts of money for it.  I was so full by the end I couldn't even finish the cake.

The service here bears some additional mention.  Timmy was probably the best waiter/bartender I have ever had.  His knowledge of the menu, beer list, scotch and wine was impressive, he was entertainingly funny (I was eating alone, so it was nice to have him occasionally stop by to chat), and he was happy to discuss all of the above.  He easily earned his tip (about 30%, and honestly, he should have gotten more) and I made a point of finding one of the managers on the way out to ensure that he received some recognition.

Overall this was one of the finest meals I've ever had, at an exceedingly reasonable price (except the beer; the beer was expensive) considering what I got.  I'll definitely be going back, and I highly recommend it to anyone who finds themselves at Foxwoods and hungry for some meat.

Check us out on Facebook!
Posted by jkommelb at 1:53 AM